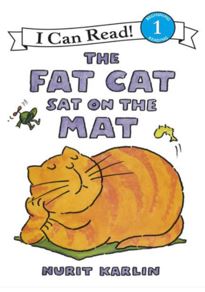 (The)Fat Cat Sat On the Mat

As the title says, the story begins with the fat cat sitting on the mat of the rat. Rat wants to get the cat out of the mat, so he brings a bat, hat, and also a dish with a fish. When Wilma, who is the witch and the owner of these pets, comes back and asks what happened, the rat appeals to his resentment. But Wilma doesn't agree with the rat's point and the cat leaves easily.

It was impressive because I could feel a nice rhythm in this part of the book.
Most words ending with '-at', so it was really fun to read, and also the light debate between the cat and others(rat and bat) was fascinating, too.